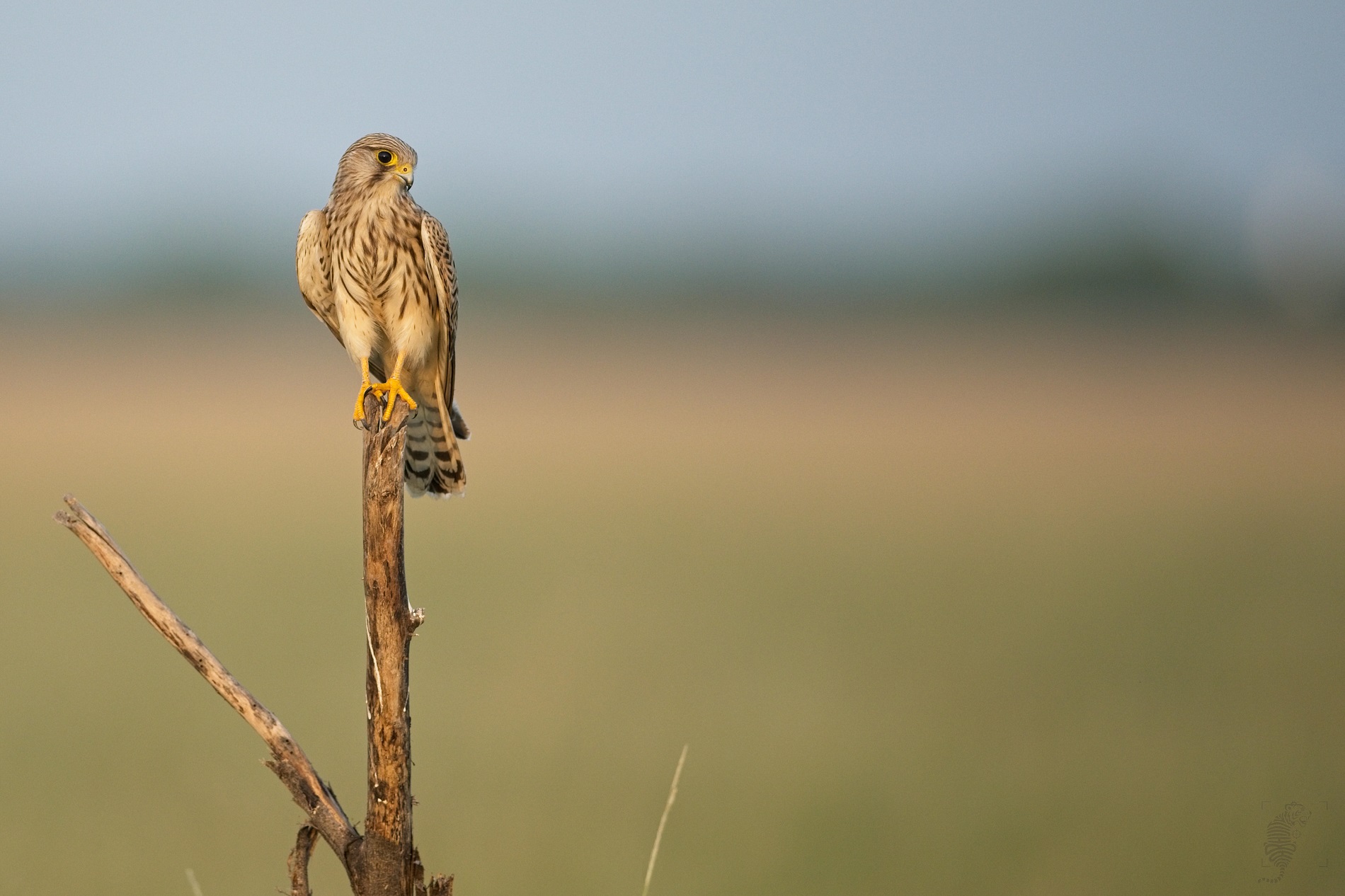 Tal Chhapar: A release & a revelation!

The pandemic has put paid on all photographic endeavours & aspirations, what with the unending lockdowns & 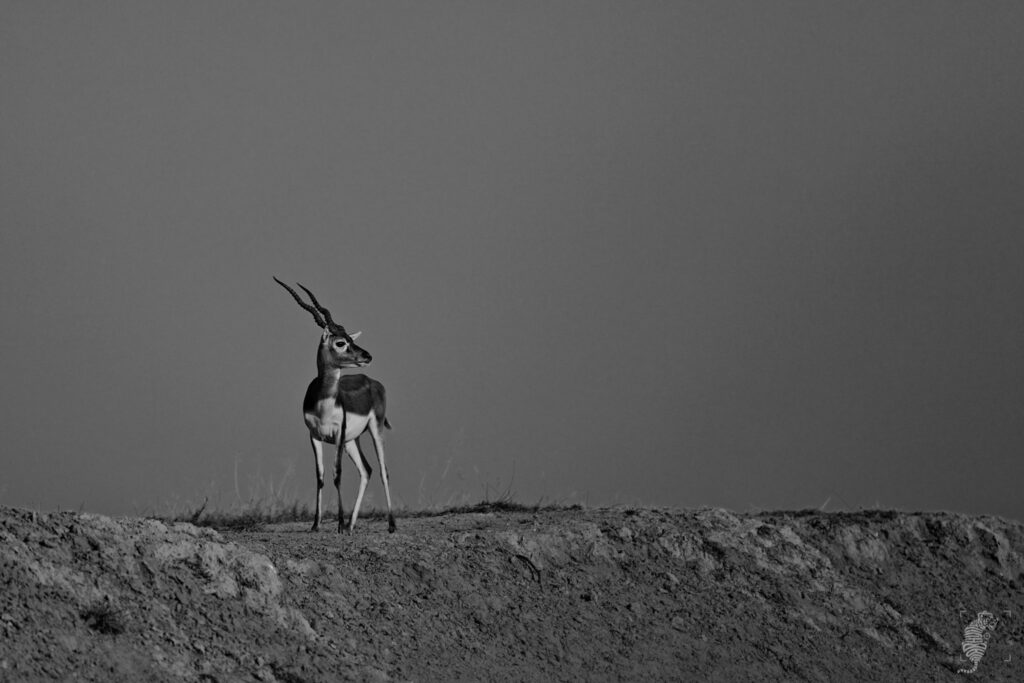 uncertainty. Work means no respite from COVID. Caring for the COVID hit unfortunate souls, sharing the grief of the relatives & basically being driven to a dark corner of numbness & helplessness has you in a state where there’s little left in the tank for creative pursuits. As the scenario all over the country evolves for the better, ideas take hold & they lend wings to aspirations. A long-awaited & aspired for, break, does become a reality.

The impact of the last couple of years on the state of affairs is to be seen right from the suspension of many flights on many routes. The Nagpur-Jaipur flight is one such. An unforced & not a very welcome hopping flight is a trade you have to pay off, to reduce travel time & maximise shooting time. A tumultuous flight hop is in store but fails to dent the zeal. Jaipur airport to Tal Chhapar is an enjoyable road trip through rustic Rajasthan. We reach late at night. Hit the bunk & sleep off.

Raptor’s inn is a conceptualisation of Mr Atul Gurjar, a young man in his thirties, with a family, who has left a paying job in the tourism industry. Moving back from the urban life of Delhi he has dreamt of & pulled off the task of creating a homestay with a clear focus on birders & photographers as its patrons. A two-storey building in the by-lanes of the small quaint town of Chhapar, near a 600-year-old Karni-Mata temple-fashioned like a small fort, on the Chhapar-Charwas road, Raptor’s Inn, is a stone’s thrown from the park gate. Atul & his staff are courteous & capable.

The park itself is a story of how the efforts of a single man with a vision can convert a barren piece of land into a Bird & Blackbuck sanctuary over a few years. The execution of the dream in itself needs an iron will. The erstwhile hunting grounds of the Kings of the area, who still have a fort near the park & which now houses a secondary school in its precincts, was a fallow land with thorny shrubs abounding & no wildlife worth the mention. Mr. Soorat Singh Poonia, an assistant conservator of forests, was the man with the vision to convert this wasteland into a grassland. What it takes to realise such an audacious dream in a place with an annual rainfall of 300mm & saline land, is a true testament to resolve & unflinching human industry. 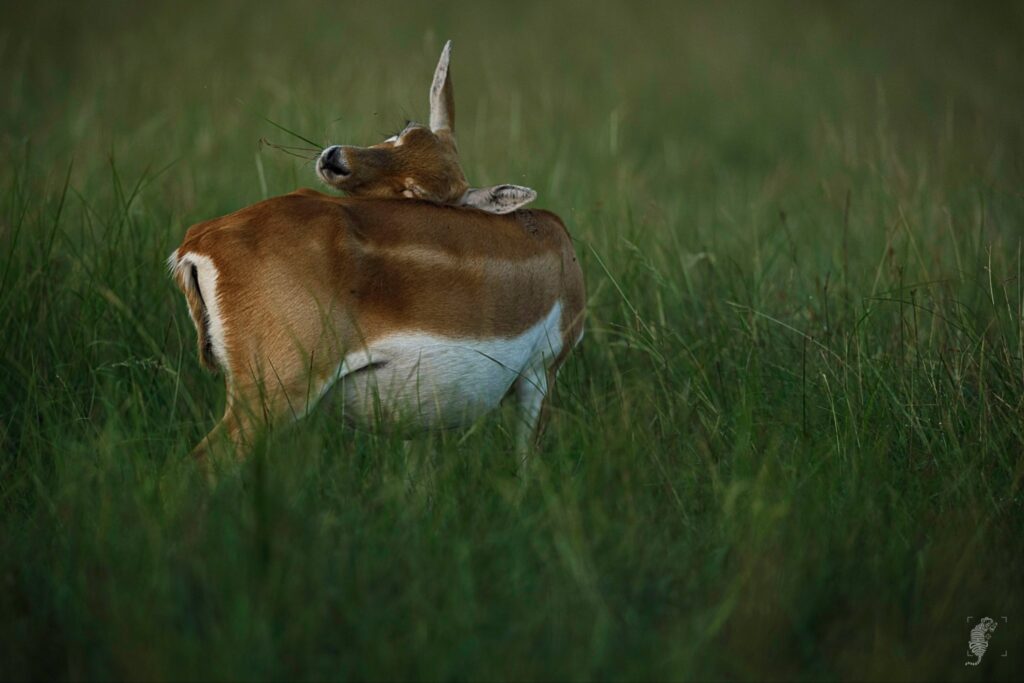 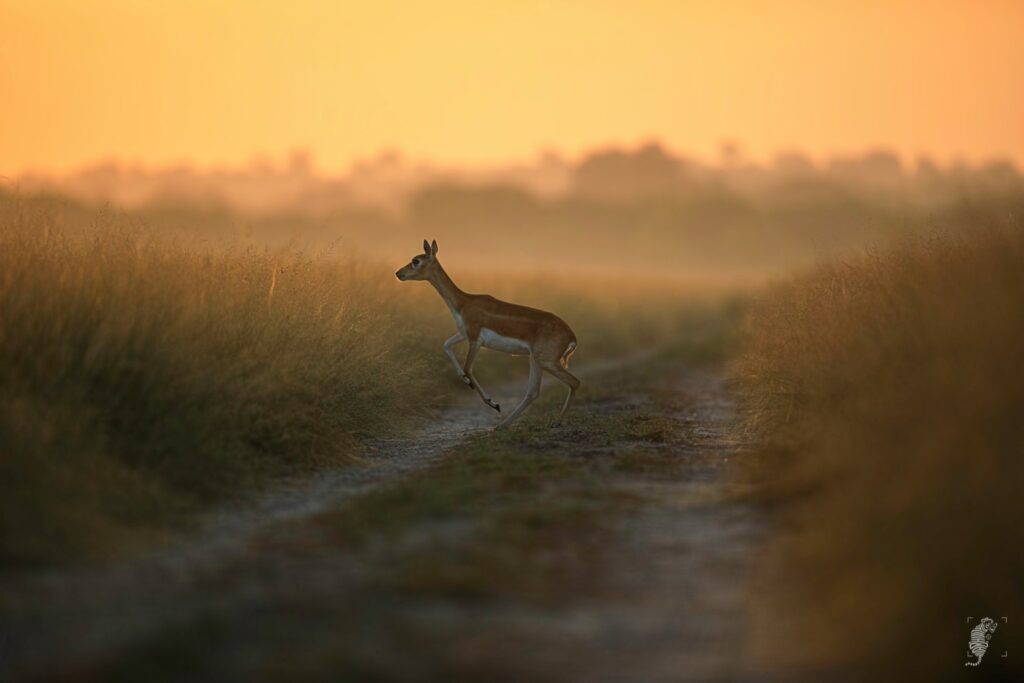 The park is open from sun-up to sundown. A land with a total area of 9 sq. Km, it houses raptors & other birds, blackbucks in big numbers & Blue-bull. Besides the desert fox, snakes & cranes & storks. Raptors are migratory, making this place their hunting ground during the winters. Kestrels, Hawks, Harriers, Eagles, Vultures, Falcons, Kites all abound. A feast of locusts, grasshoppers & their ilk is in offing for them in the tall grass. 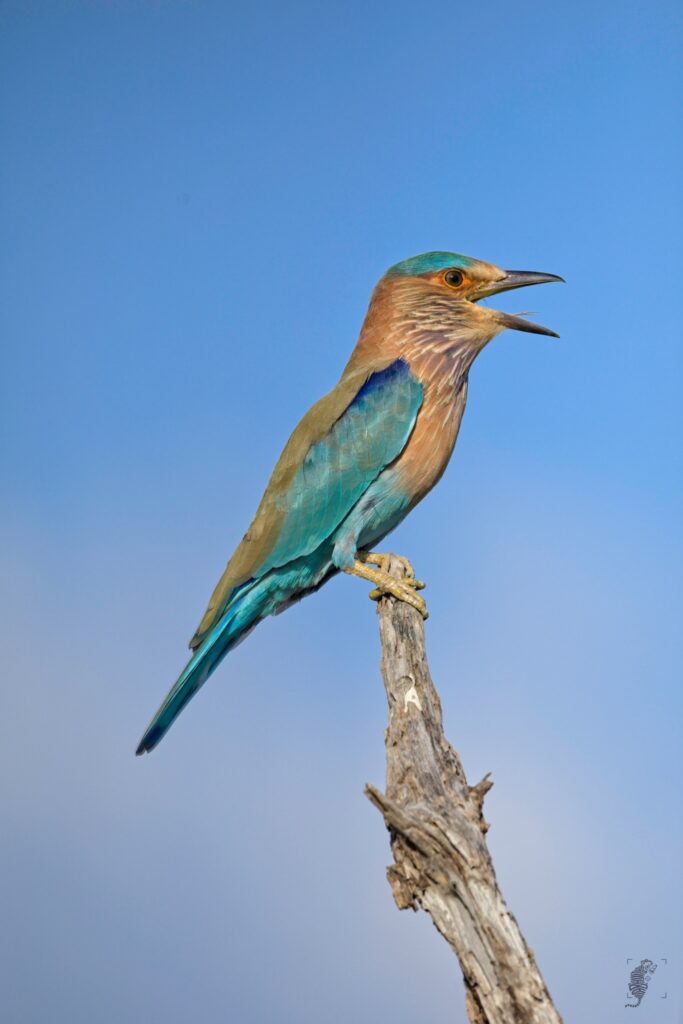 Being a flatland it is rather easily navigable if you don’t end up in a bog & have your vehicle stuck, as we find to our amusement on the very first evening of our stay here! Ramu at the wheel is a bit embarrassed as we three help him with pushing & pulling the vehicle through the bog. But it is all fun. 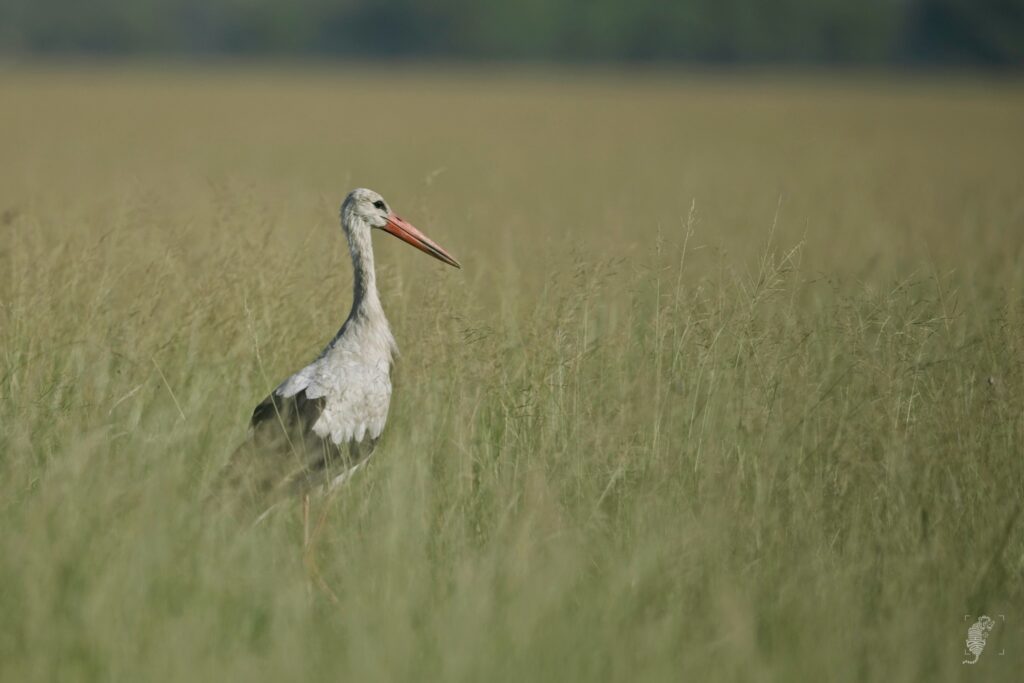 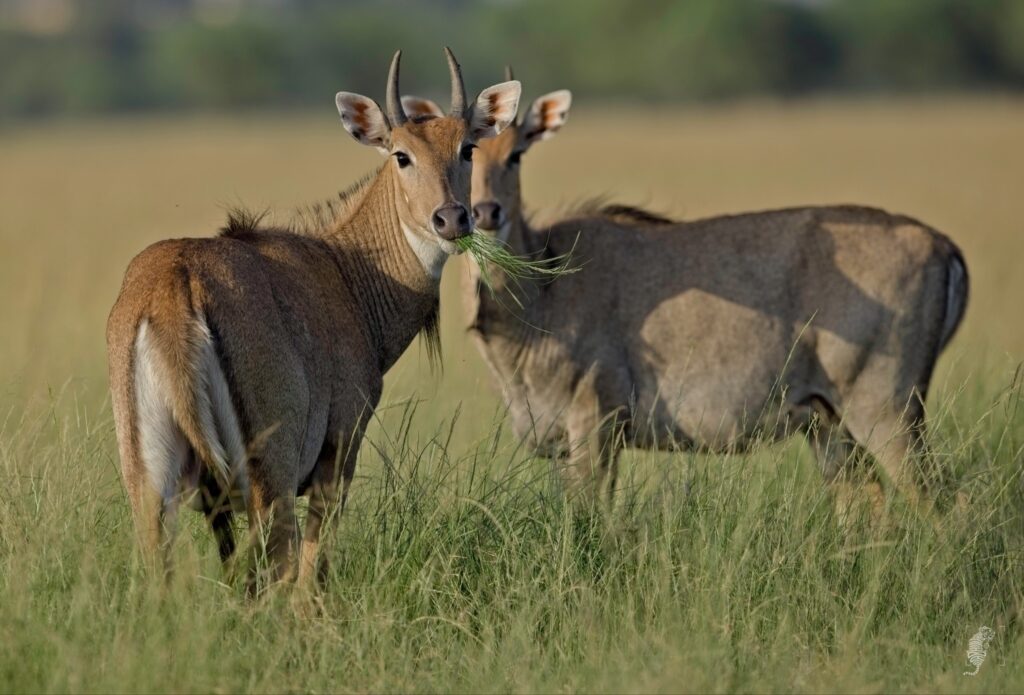 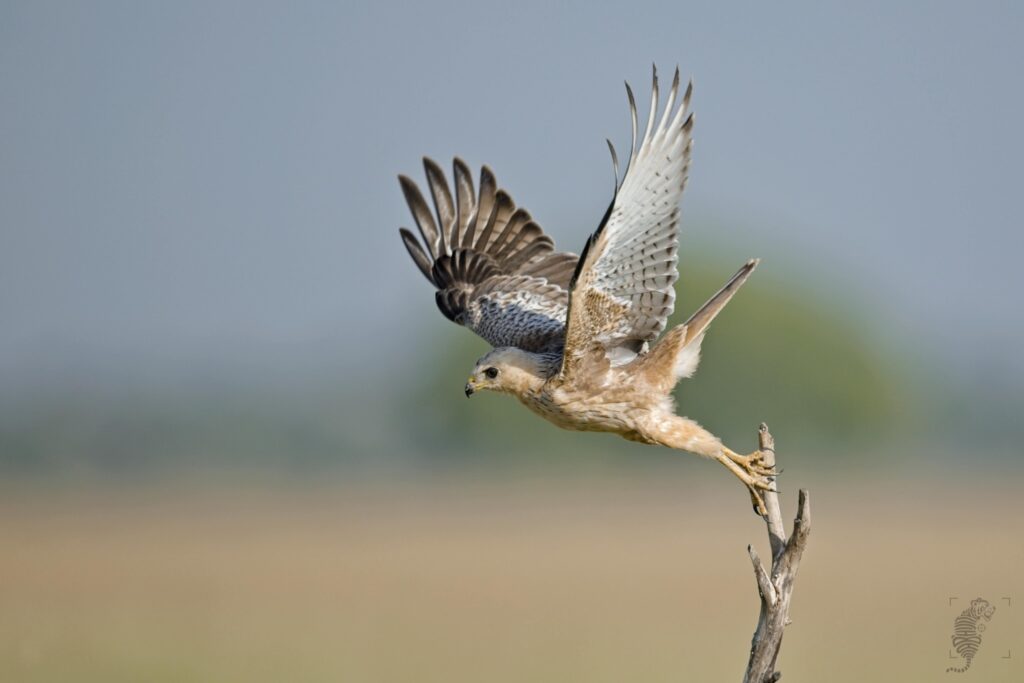 Food at Raptors Inn is one thing which needs a special mention, homemade & delectable, simple humble vegetarian fare. The food is always warm & served with warmth, and never monotonous in its taste or contents, and lacks the plastic taste we find in most resorts. 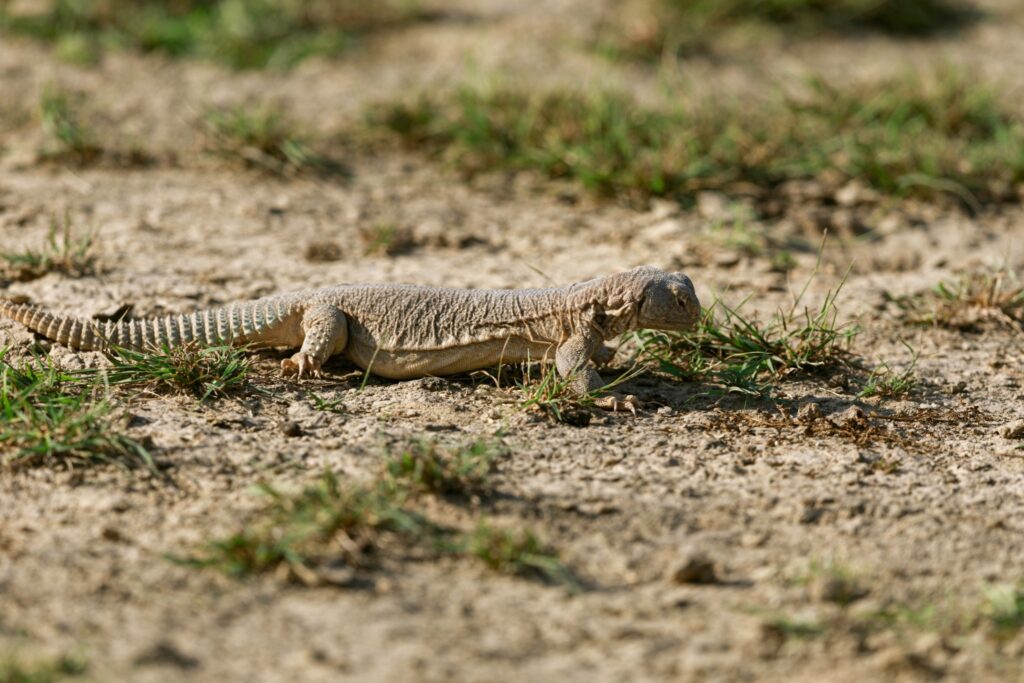 The area of Gaushala is a veritable treasure-trove for a birder. A big scrubland, this place is literally teeming with thousands upon thousands of Spiny-tailed lizards.

These vegetarian reptiles thrive in the grass which grows here and burrow into the soft land. They come out to bask in the sun: whence the whole drama of Gaushala-the place, emanates. Come lizards in the open-its a party buffet for Lagger Falcons, Desert foxes, Cobras & sand Boas. Eagles, too join the fun as do Long-legged buzzards.

In a moment full of surrealism, we are witness to a triangular slugfest between an Eastern Imperial eagle, a Long-legged Buzzard & a desert fox for territory. No casualties are had in the welter of flexing muscles & baring of talons! Such 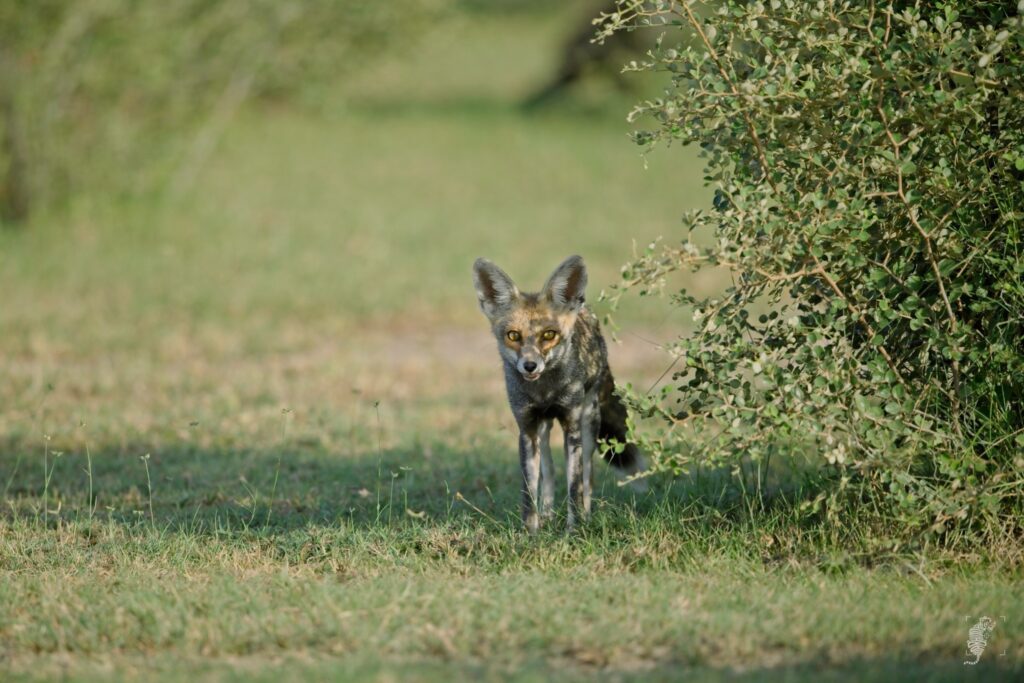 scenes are common in this veritable battleground. That the black-bucks, busy in their head butting matches & wooing of the roes, is a background event, speaks about the eventfulness of the place, from a birder’s perspective!
Come December, all the various vulture species are seen in this Gaushala area I hear. The village folks turn benevolent & leave cattle carcasses for the vultures to feed upon in this area. 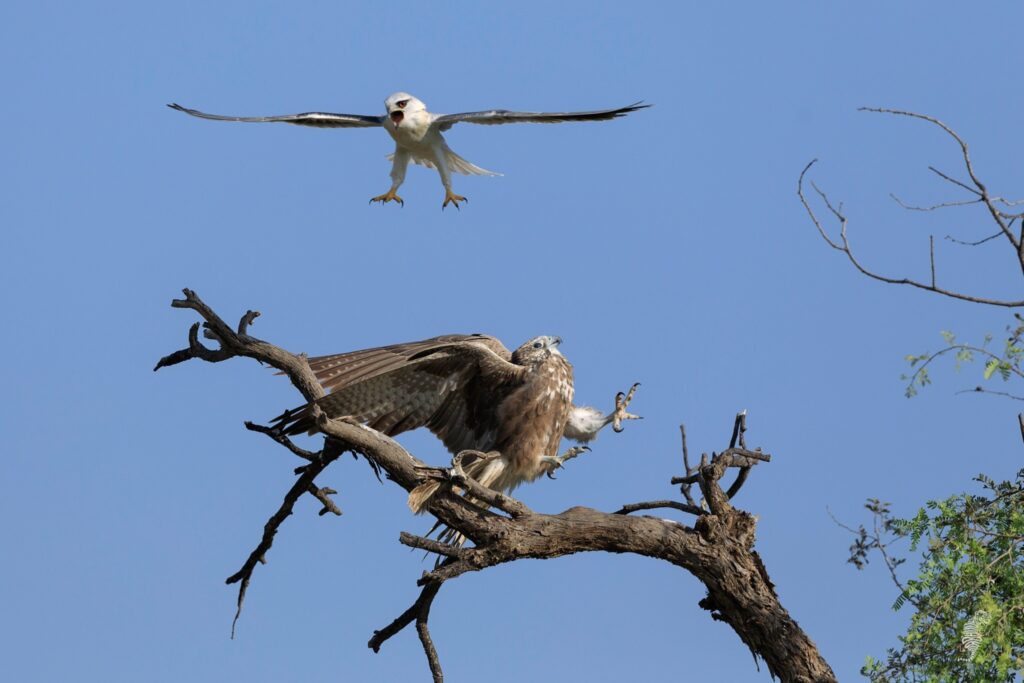 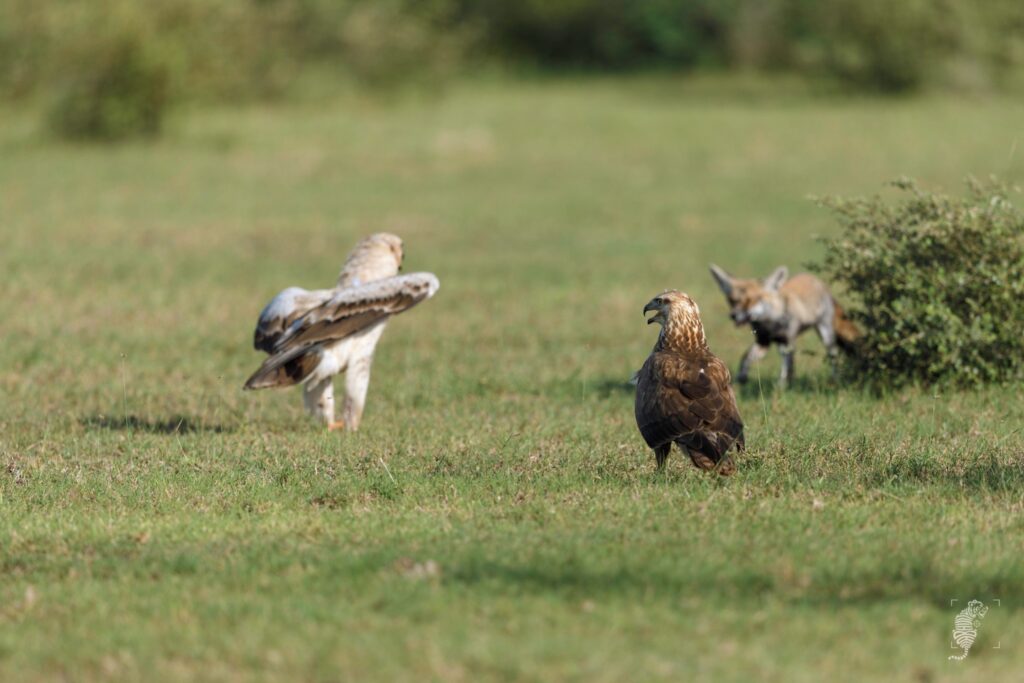 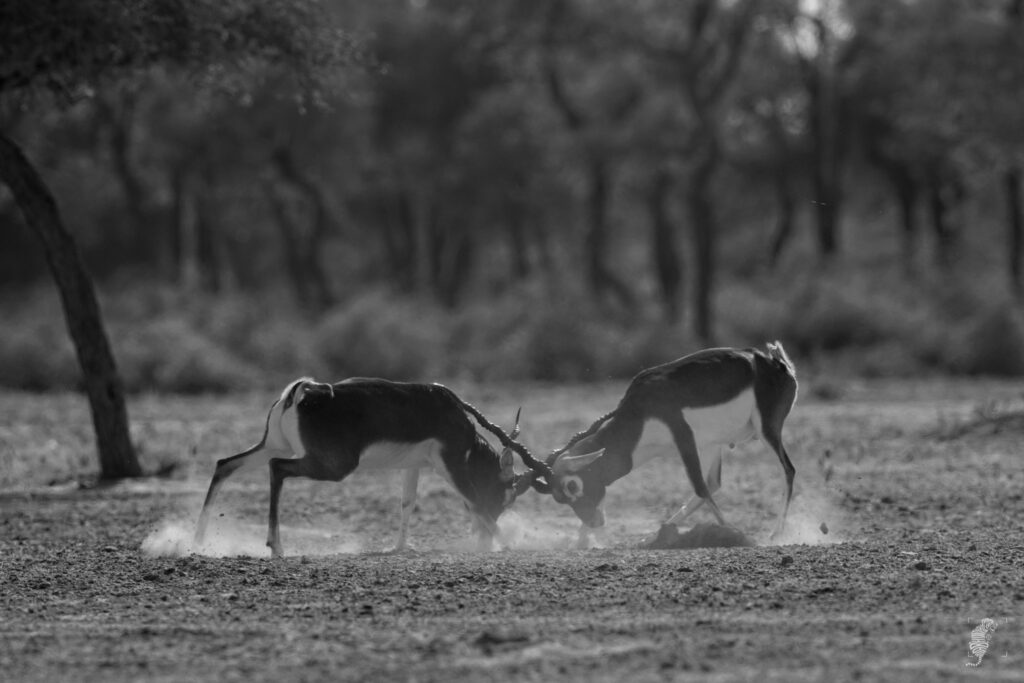 The Raptor devouring a Spiny-tailed lizard on a tree stump is probably the prototype image of Gaushala, it seems. 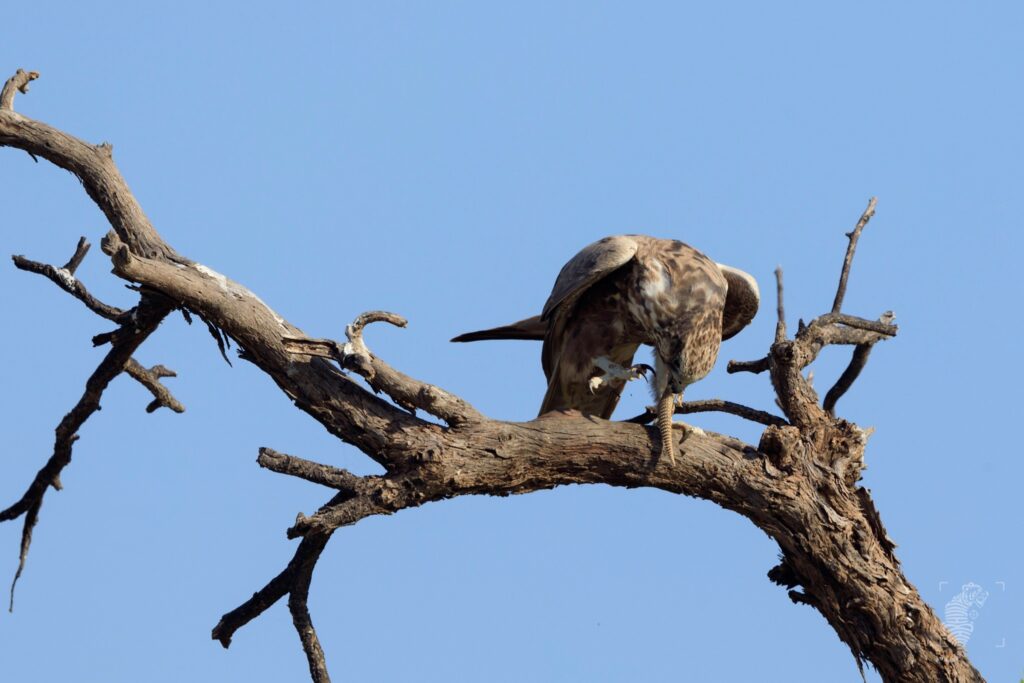 The sunsets at Chhapar are magical! Flatland, a couple of hills & golden light always produce magic in the evenings. Grazing Bluebulls & blackbucks add to the magic of sunsets here. 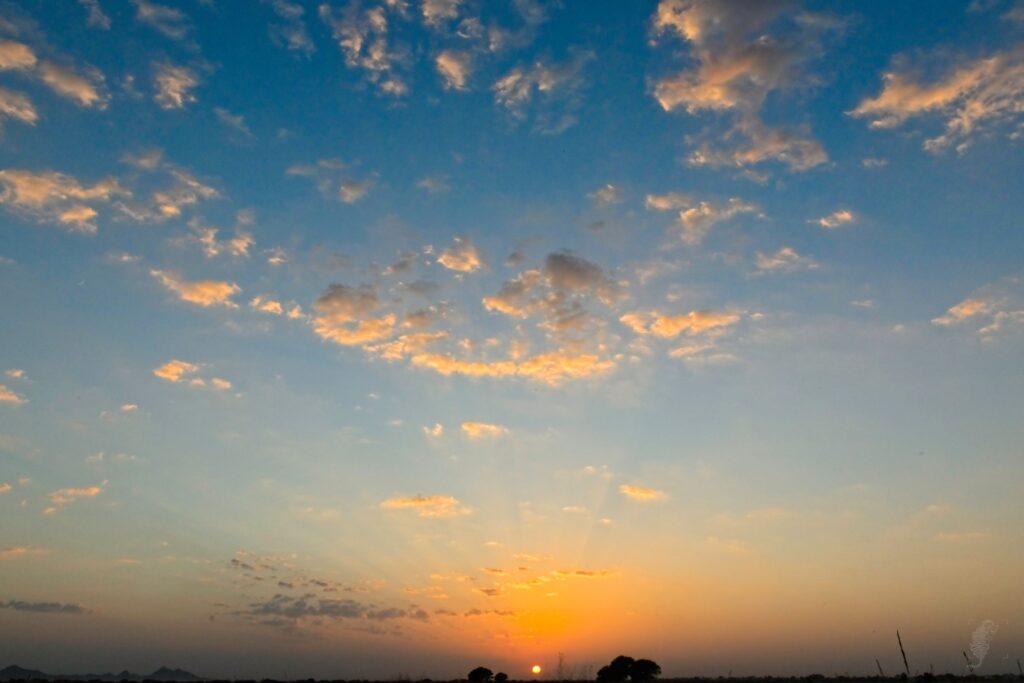 There is another amazing ecosystem thriving right by the boundary of the park- unexpected as it may seem.

The Salt-pans here, outside the sanctuary precincts, play host to another set of birds- Waders & stilts, & avocets & the crumbling step-wells host Owls & black francolins & sparrows & a whole fresh set of birding! Worth a look this part of Chhapar is! 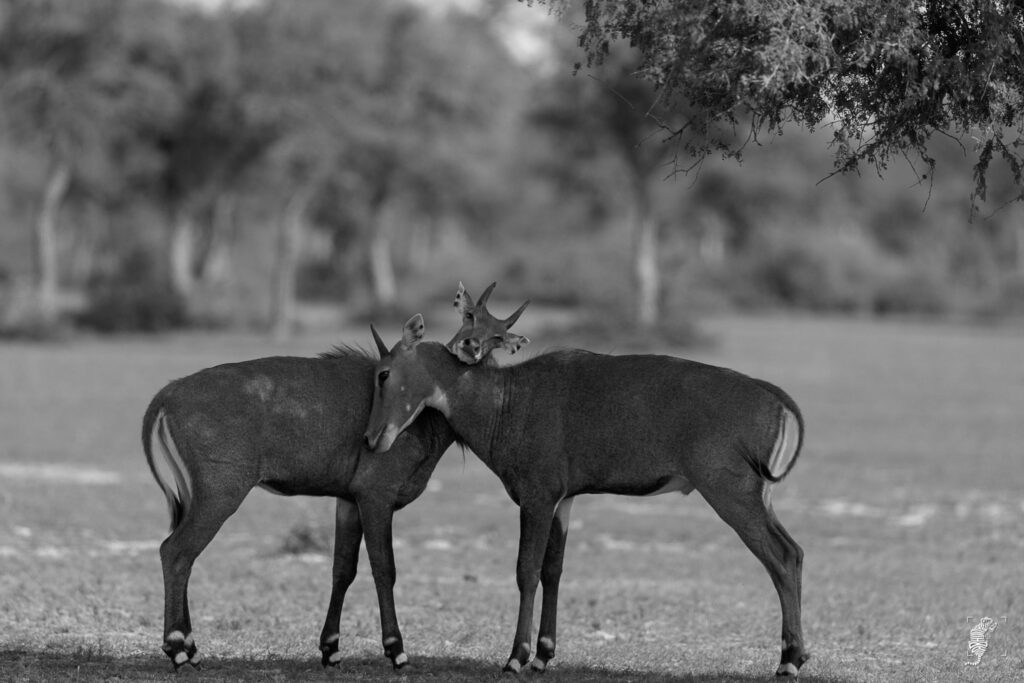 A stone’s throw from Jaipur, this hidden gem of a place with wonderful people & an amazing sanctuary with a wonderful conservation story as its backdrop, makes it worthwhile for any birder/wildlife photographer. 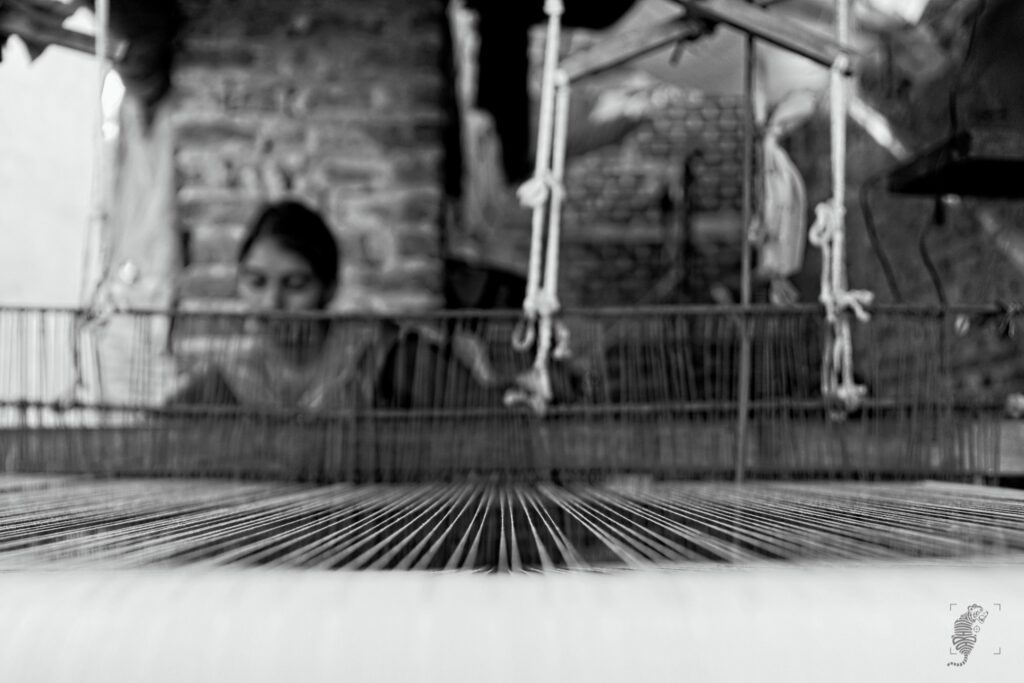 A place which welcomes you & reveals a lot………. 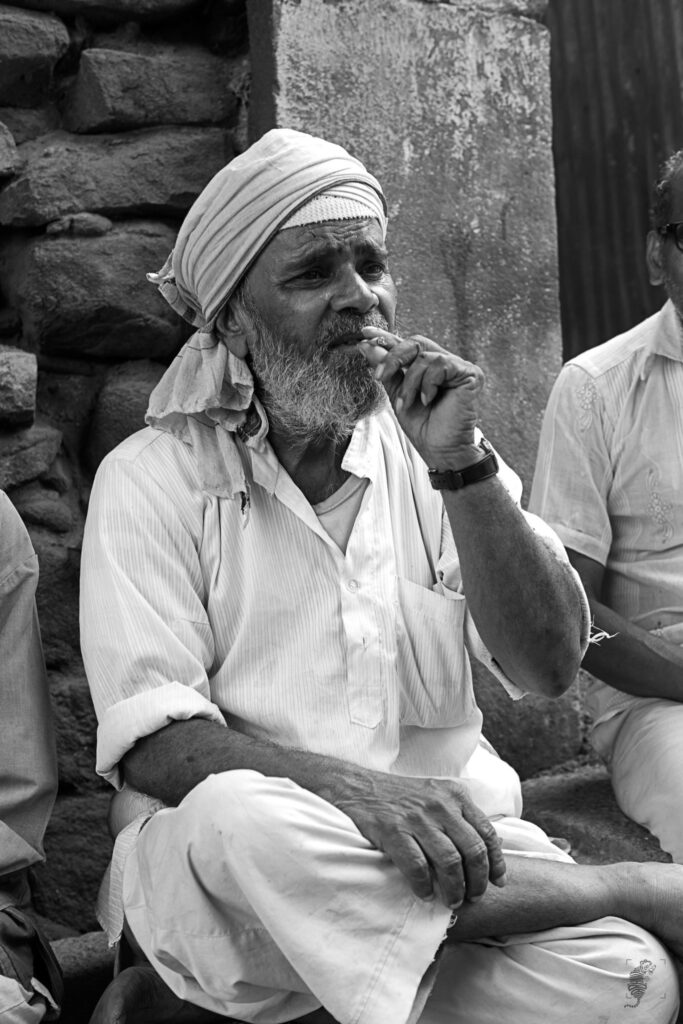 Superb photography and wonderful write up….

Thanks for your kind words. I make an honest effort to bring lesser known places to the notice of everyone.

One of the excellent blogs I have read recently! The photography is amazingly awesome!

Thanks so much for your words of appreciation.

Thanks. The effort is always to make good images in the field itself!